Litzmannstadt Getto 14 II 1944
Mr. Zemel came and delivered a speech, or rather he repeated what the Chairman had said before. And: those who are to be deported but are hiding are being aided by other people. This is forbidden … Apparently, this is going to be some kind of easy labor.

But who knows? What’s more, during the working hours between 7 a.m. and 5 p.m. nobody will be allowed to walk in the streets. Theghetto is turning into a Arbeits Lager [Labor Camp}.. The apartments will have to be locked. Only the bed-ridden with medical certificates will be able to stay inside. Nobody else. Now I don’t know what’s going to happen to Saturdays … after all, an apartment can be locked with a padlock. What’s going to happen with attendance at the workshops? God! What’s going to happen? Only You know.

Litzmannstadt Getto 22 II 1944
We don’t belong to Żydowska any more, we are a workshop now and it’s Mr. Szuster who is our boss, not Mr. Zemel. After all, it’s better …

Litzmannstadt Getto 28 II 1944
I couldn’t write in the workshop, because I was busy with Cipka’s dress. I had a small problem with the soup, so my break was rather sad (because of the soup). But to the point! Sewing something gives me a lot of pleasure and when I finish it I’ll know that I’m stronger … I’ll know that regardless of the conditions I’ll be able to move forward. I’ll have a profession. I won’t depend on my fate, but my fate will depend on me. I feel stronger.

A few years ago, in my dreams, when I was imagining my future, I could see sometimes: an evening, a studio, a desk, there is a woman sitting at the desk (an older woman), she’s writing … and writing, and writing … all the time … she forgets about her surroundings, she’s writing. I can see myself as this woman. Another time I could see a modest apartment which I share with my sister—earlier I thought it was Tamarcia, but today it’s more probable that it’s Cipka. Some other time I can see: an evening, a modest room with lights, all my family sitting at the table. It’s so nice … so warm, cozy … Oh, it’s so good! Later, when they all go to bed, I sit at the sewing machine and I’m sewing … sewing … it’s so sweet, so good … so delightful! Because everything I make with my own hands is our livelihood. It pays for bread, education, clothes … almost everything. The work I do with my own hands … I’m very grateful to Mrs. Kaufman for this … and then (obviously only when I think about it, because it’s not a reality yet), then I feel that, that I can be useful, and not only can, I have to, I have to! (I have to stop now and bring some water.)

Will I be able to write now as I was writing before? I have to try. (Oh, damn it! Cipka took my pencil case and a pen. I had to try four nibs. None of them is good and I can hardly write.) I know, because I’ve said it to myself many times that work is essential in human life, at least in mine. I’d like to dream up work for myself, difficult but rewarding so I’d know that I’m doing it for somebody, that there is somebody. This is most important: I’d like to give but also to take. It doesn’t come easy.

Litzmannstadt Getto 13 III 1944
Besides, it’s not good in the ghetto. In the cooperative office they register people for work in Marysin. A list has been sent from the bank to Bałucki Square. Minia is on this list. Minia is (I’ve noticed this) a big cynic … she laughs all the time … oh …

Litzmannstadt Getto 15 III 1944
It’s a pity that last night I didn’t write, because now I have really a lot to write and I don’t want to stop, so I’ll write it in order … So, last night we agreed that three of us (Chanusia is a little sick, yesterday she had a high fever, today she’s feeling better) would go to pick up some coal. We were to collect 100 kilograms. The entire ghetto has to do it by Saturday. I went alone, because on the way I wanted to visit Chajusia. At 9:40 p.m. I stood in line …

The line was very long! Very long! Accidentally I stood among several women, who were very talkative. […] One was saying, “It looks like the line is shorter at 7-7:30 p.m. because people are having dinners.” “Yes,” confirmed the other one. “And at 9-9:30, after the meal, they leave their houses and start hunting. Oh, we live like the primitive people, we come home after a day’s work, eat our meals in a hurry and go hunting …” Something inside me sobbed and hurt. Yes, we’re wild and primitive people and … we go hunting. Oh, it hurts so much! We, the people of the 20th century—we, who just a few years ago, had a relatively high standard of living, we are now compared to the primitive people! Oh, God! We lived and worked so that after a few years we could face such a comparison. Oh, it’s so tragic.

Yes, I stood in line for a long time. The mud was horrible. I don’t wear these leaking shoes any more but I wear the shoes that are very tight and I can’t put on more than one pair of stockings. No wonder my feet were freezing and I was shivering. Brr. Finally … finally (I won’t elaborate on that) I entered the coal yard. It was 11:30 p.m. I met Estusia, Minia and Cipka in front of a pile of coal (oh, they had to also bring Cipka). We came home at 1. I had a little adventure in the street. In the Old Square, a sack (20 kilograms) fell off my back (I couldn’t pick up more). There was a hole in it and pieces of coal were scattered all over. I was walking alone and without any help, so I wanted to wait for Estusia. Estusia did not arrive. What to do? I had no other choice but to take out a needle, a piece of thread and stitch it. But I couldn’t lift the sack up again. As if out of spite, nobody was coming. A sled would have come in handy for me. I had been waiting for Estusia too long, so I decided to pull the sack. I walked a little bit and … stop … I was halted by a large puddle. I wanted to lift the sack up (I didn’t succeed), when I suddenly heard Estusia calling me. She had been looking for me everywhere, she didn’t know where I was. She went home and brought a sled. We went to bed at 1:30 a.m.

Now I’m not feeling well. But enough of that. I have to collect 40 kilograms more. Yes, I can see how much we’re humiliated—how far we’ve departed from humanity. Oh, God, how stupid, hopeless (I can’t find a better phrase), miserable our life is. Oh, God, how dark it is! Please, send us a beam of light! Help us! We’re so wretched!

Litzmannstadt Getto 28 III 1944
Finally after 4 p.m. Minia came back. I found out that yesterday Rozenmutter talked to the Chairman and they needed people to roll out the matzos in the bakery, which had just opened. Minia was to be among them. She was to report to the bakery (at 14 Pasterska Street) at 6 p.m. with a note she was about to receive. However, she didn’t get the note before 6 and she went to see Rozenmutter without it. It turned out later that it was Dwojra who had the note. When Estusia brought it to Minia, it was too late. She was told to come back the next day. Now Minia, totally upset, has gone to one bed and Chanusia, equally upset, to the other.

Today was so idiotic for me. 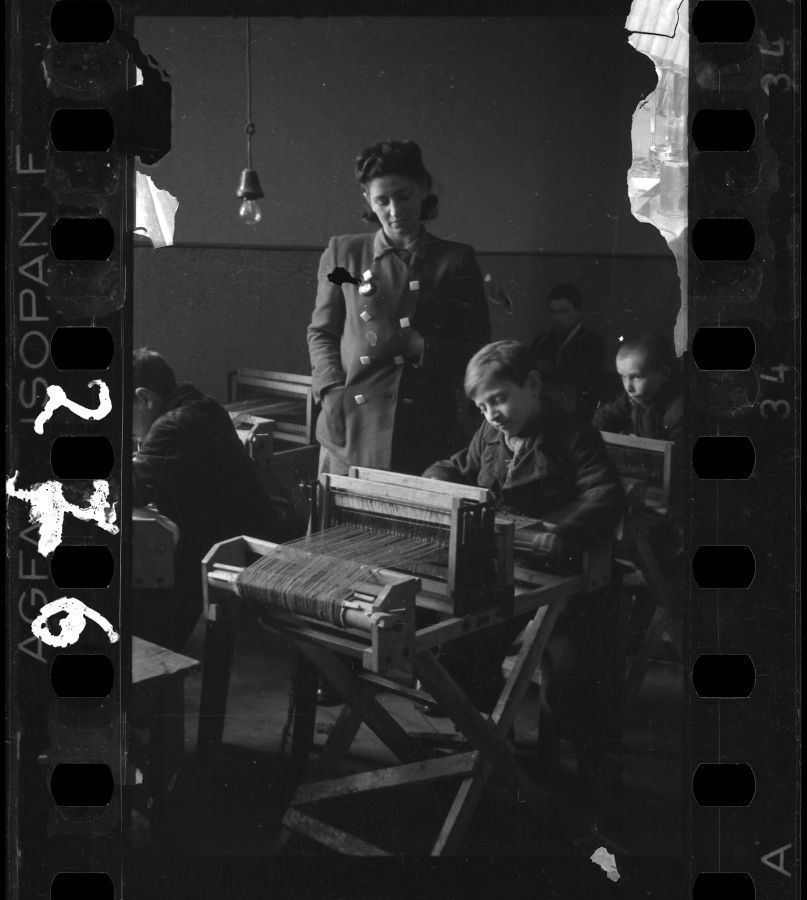